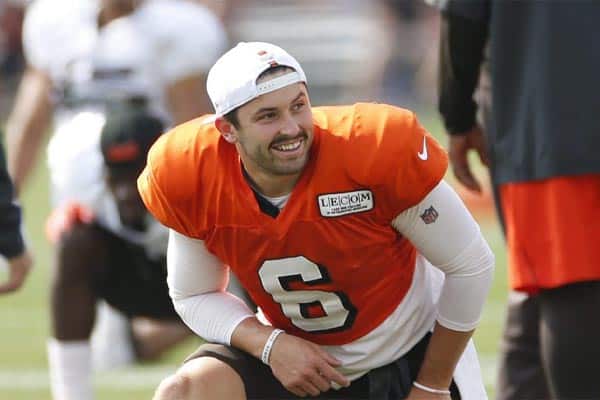 I mustache you a question: What style facial hair will Baker Mayfield have when the 2019 NFL regular season kicks off?

The Bovada oddsmakers are asking this hairy important question in the form of a prop bet on the Cleveland Browns franchise quarterback, who showed up to preseason training camp rockin’ the ‘stache.

Here are all of Mayfield’s facial hair styles you can bet on when the Browns take the field for Week 1, and you bearder wager on these as soon as possible because they likely won’t be up for long!

What Will Baker Mayfield’s Facial Hair Style Be For The Browns Week 1 Game Of The Regular Season?

The odds favor Mayfield keeping the mustache at +110, but the full beard is a close second with +175 odds. Clean shaven comes in third at +300, but we think this is a bit of a longshot so take a razor to those odds.

A horseshoe mustache at +700 would be a good bet if he played for the Broncos or Colts, and since Mayfield isn’t Drake, we’ll rule out the chin curtain at +1200 for now.

As much as we think anyone on the planet should rock the mutton chops 24/7/365, at +2000 odds, we think there is better value elsewhere on the board.

But the value isn’t with the chin strap at +3000 because again, Mayfield is not Drake!

That leaves the soul patch at +3000 as our final option, and if you’ve ruled out the mustache and full-bearded bets, then this is what we believe Mayfield will wear on his face for the first game.

From Howie Mendell to Smash Mouth and Billy Ray Cyrus to Brad Pitt, we believe it’s time Baker breaks out the soul patch and joins this esteemed barbered bunch.

And if Mayfield doesn’t rock the soul patch now, we believe he’ll shave it for later in his career.

Now, while you mullet over those odds, just know that Mayfield has already responded to reporters asking him about his current “pornstache” and how long he plans to keep it.

Needless to say, he didn’t stubble over his words:

Reporter: “You seem to be having fun on camera a couple of times with the mustache. Is there a story behind it?”

Mayfield: “Maybe you’ll find out, maybe you won’t. I don’t know. That’s the elegance of having a mustache. You just don’t know what’s going to happen.”

Reporter: “No kind of bet or quarterback bonding or anything like that?”

Reporter: “You’re not appearing in any ‘films’ in the future, are you?”

Ohhhhhh snaaap! Someone better get Tony some aftershave to deal with that burn.

Regardless of what beard style Mayfield goes with, the Browns have been the talk of the NFL offseason, and after trading for Pro Bowl wide receiver Odell Beckham Jr., experts, handicappers, and oddsmakers all believe this team could be a Super Bowl contender this season.

Bovada currently has the Browns listed at +1200 odds to win Super Bowl 54, which ranks sixth among all NFL teams.

And make no beards about it: For the first time ever, the Browns have a legit chance to win it all, and you can take that bet all the way to the barbershop.