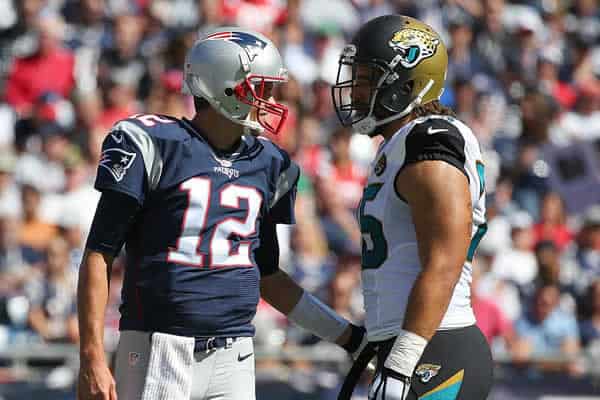 The Jacksonville Jaguars will take on the New England Patriots in Foxborough for the AFC Championship. The Minnesota Vikings will take on the Philadelphia Eagles in Philly for the NFC Championship. Winners go to the Super Bowl. New England and Minnesota are favored to win, but there have been a few instances of underdog teams winning so far in the Playoffs. So, which teams should you put your money on in the NFL betting lines for the conference championships??

Regarding the AFC, all signs point to New England. The Pats finished the regular season 13-3, clinching the AFC East and securing a first-round bye. Sitting out the Wild Card round means watching as the Playoff herd is thinned out. With less competition, you are that much closer to the Super Bowl. In the Divisional Round, New England saw the ambitious Tennessee Titans come to town. It was a harsh trip for the Titans, as they took a 35-14 beating. QB Tom Brady, who could potentially be playing his last season, threw for 337 yards and 3 touchdowns. WR Julian Edelman was lost to injury in preseason, but receivers Danny Amendola, Rob Gronkowski, Brandin Cooks and Chris Hogan are all lethal weapons. Even their running backs put up solid receiving yards on top of their rushing yards. Dion Lewis, Brandon Bolden and James White contributed on both sides of the offense.

The Patriots’ defense, led by DC Matt Patricia, hasn’t given up much all season. They held the Titans to only 14 points in the Divisional Round. Interestingly enough, Jacksonville-New England was the first preseason game for both teams and the Jaguars won 31-24. However, that game was played with practically entirely different rosters, as it mostly for backups to get in some playing time. Still, from a coaching standpoint, it is something to consider.

Jacksonville has been on a Cinderella season, finishing 10-6 and getting a Wild Card spot in the postseason—the first Playoff trip since 2007. Since 2012, the Jags have finished 2-14, 4-12, 3-13, 5-11 and 3-13. This shows how much progress they have made this season. RB Leonard Fournette was their 2017 Draft pick and he has had a statement year, especially in the Divisional Round against the Pittsburgh Steelers. Their other recent picks, CB Jalen Ramsey, DE Dante Fowler Jr. and QB Blake Bortles have all been instrumental this year.

The Jags faced the Buffalo Bills in the Wild Card round and the game was primarily a defensive matchup. Jacksonville had the only touchdown of the game, which finished 10-7. After this performance, not many expected them to defeat the Steelers in the next round. However, Jacksonville embraced their role as the underdogs and defied all odds in a 45-42 victory. Bortles threw for 214 yards and a touchdown while Fournette rushed for 109 yards and 3 touchdowns. A key takeaway from this game is that Jacksonville’s defense, which has been their redeeming quality, gave up 42 points. If it weren’t for the offense finally showing up, the game would have gone to Pittsburgh. If Jacksonville wants their glory run to continue, they will need to be firing on all cylinders come Sunday.

The NFC has been somewhat of a toss-up all season long. “Super Bowl contenders” has been attached to several teams throughout the season, but the last 2 remaining were the first to get such notice. Philadelphia went 13-3 on the season, mainly due to QB Carson Wentz and the defense, and clinched a first round bye. Wentz was electric all season up until he was hurt in a game against the LA Rams. Backup QB Nick Foles entered the lineup and the Eagles went on to drop only 1 of their last 3 games. Not many expected them to beat Atlanta in the Divisional Round, even though the Falcons were shaky all season long. However, the Eagles defied the sportsbooks and snuffed their offense to win 15-10. Their defense will be needed again against Minnesota if they have any shot of heading to Super Bowl LII. The offense will also need to step up. Foles had a solid game against Atlanta with 246 yards, meanwhile the run game was limited under Jay Ajayi, Nelson Agholor and LeGarrette Blount. They will need both sides of the offense running at full speed to beat Minnesota’s #1 defense.

On top of having the #1 defense in the country, the Vikings’ offense has been strong through QB Case Keenum, RBs Latavius Murray and Jerick McKinnon and receivers Stefon Diggs, Adam Thielen, Jarius Wright and Kyle Rudolph. Their Divisional Round game against the New Orleans Saints looked to be sealed after putting up 17 unanswered points, but the Vikings took their foot off the gas and allowed a comeback. The game saw a pair of field goals exchange leads late, leaving Minnesota :25 to score a field goal. However, things worked out differently and WR Stefon Diggs was able to convert a touchdown as the game clock expired, sending them to the NFC Championship in explosive fashion. Minnesota should take this game as a lesson to not relent down the stretch. They have the means to win it all, but they must remain vigilant throughout the game.

From a football betting standpoint, these games look to be a sure thing in terms of the favored teams. The NFL loves an underdog story, so it would not be wise to discredit the opposition outright. New England won’t want to give up their chance at a 6th Super Bowl in the Brady-Belichick era, but Jacksonville is hungry for the upset. Both Philadelphia and Minnesota want to cap off their strong seasons with a championship, despite having suffered major injuries. Analysis tells you to bet on the Pats and Vikings, but anything can happen.