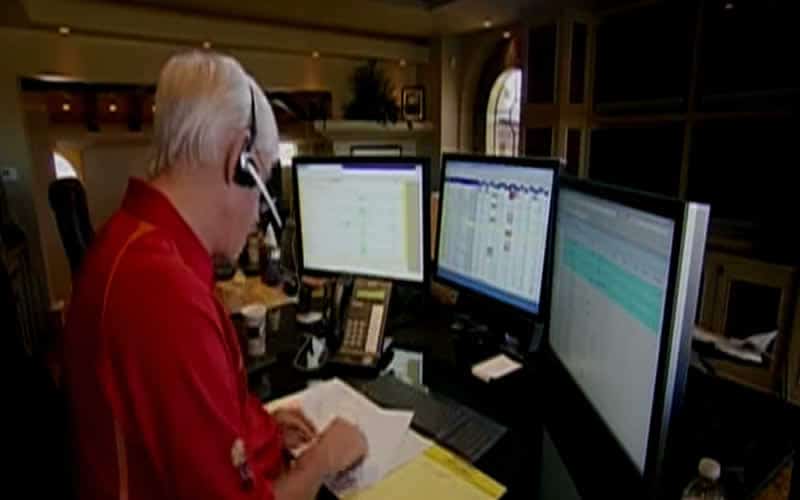 Anyone that has been around sports betting for a minute will recognize the name “Billy Walters”. He’s made $400,000 on a hole of golf, and more than $1 million in a round. He’s won $3.5 million on a Super Bowl bet. Bookmakers know of him and fear him. Yet, no one knows who he is because he can never set foot inside a casino. He calls himself a Kentucky Hillbilly. Everyone else calls him… Billy Walters.

A Gambler From Birth, Learn More About Billy Walters – The Richest & Most Feared Man in the History of Sports Betting

“If you’re committed to being a professional gambler, and you want to be the best you can be, you spend every waking moment trying to figure out a way to beat the game.” – Billy Walters

This is our short biography of the richest and most feared man in the history of sports betting, Billy Walters. Billy Walters grew up in Munfordville, Kentucky – it’s a small town of 1,600 people just an hour south of Fort Knox. His mother was an alcoholic, and was never around, so Billy and his siblings were raised by his grandmother. His father was a professional poker player. His uncle was a professional gambler. It doesn’t take a genius to see that Billy had gambling in his blood and strong gambling related influences in his life..

He got his first taste of gambling at the ripe old age of 9 years old. He took all the money he saved from working a paper route and bet a store owner that the Yankees would beat the Dodgers in the 1955 World Series. Unfortunately he also got his first taste of losing then, too. The Dodgers won and Billy coughed up his bankroll it took him so long to earn. That didn’t stop him from gambling, though. If anything it added fuel to his fire. He wasn’t always a winner. Not back then, and nothing close to the numbers he posts nowadays (which you’ll see in a few minutes). He has lost a lot of money – even his house – which put a strain on his relationships.

In fact, Billy recalls one of the times he lost his home in a bet. He came home to his then 2nd wife to tell her that he lost the house and that they might have to move. They didn’t, but it took him 18 months to pay off the mortgage. That wasn’t the first time he came home after losing the house. It wasn’t the last, either. Billy said he came home at least 15 times with similar sob stories – that he lost everything. Not surprisingly, he then lost his 2nd wife. A person can only take so much.

How Walters Makes an Estimated $15 Million Per Year Betting Sports

“You’re either a hustler, or you’re being hustled.” Not long after his 2nd wife left him, in 1982, Walters was running his own car dealership. He was also running his own bookmaking service – a crime in the state of Kentucky. Billy was eventually caught and fined $1,000. After receiving his fine, he figured he’d just move somewhere that allowed gambling. So he moved to Las Vegas – the obvious destination for legal gambling.

And while it hasn’t been without it’s headaches (I’ll tell you about the mob ties and indictments in a second), moving to Las Vegas was the catalyst for Billy to start his own betting syndicate that would allow him to earn millions of dollars each and every year as well as the title of the richest sports bettor in history.

The thing is, though, not much is said about his operation. He’ll never spill 100% of his secrets, either. Doing so could cost him millions of dollars, and probably create more legal problems on top of what he already has. But during a rare 60 Minutes interview he did give the public a glimpse into how he makes so much money betting sports. He’s got a business – ACME Group Trading – that makes BIG bets on sports. He doesn’t make the bets himself, though. Most sportsbooks refuse to take his action. We are pretty sure that the best USA online sportsbooks we include in this guide would not be too keen on taking his bets either. His reputation proceeds him.

Instead Billy uses ‘runners’ or ‘beards’ to make bets for him (albeit illegally). Some are random ‘Joe Schmos,’ while others are celebrities… reportedly. No one knows for sure, but it’s rumored that guys like boxer Floyd Mayweather and actors Ashton Kutcher and Bruce Willis, all have made bets on Billy’s behalf. Billy controls all of this from his compound… err… his home. He uses multiple computer screens to check data and betting odds.

He gets all of his information from analysts. Guys that are knowledgeable about weather, sports injuries, teams and other things that he can use to make educated bets. He takes this information, and what he sees from the sportsbooks, and radios his bets to his runners using code names. Then they place the bets for him. His information (and his bets) are so good that people accuse him of having insider information – which is not illegal for sports bettors. According to Brian Tuohy, author of Larceny Games: Sports Gambling, Game Fixing and the FBI: “Walters, from my sources, actually has waaay too close of connections to several big time college coaches for all of his bets to be legit. He’s getting inside information from these guys without a doubt.”

On an average day he’ll make $2+ million in bets. Just during his 60 Minutes interview he made $1.4 million in bets (+10%) in the span of a few minutes. He reportedly makes $15 million per year betting on sports, and had a winning streak spanning 39 years. 2013 was the first year he posted a loss. He makes so much money that, when the lines aren’t in his favor, he’ll bet the other side to push them where he wants them. That’s power only money can buy. Unfortunately, it’s also power that gets you unwanted attention from the feds, IRS and mobsters.

Money Laundering, Fraud, Insider Information and Ties to the Mob

“I’m the most careful, conservative person you know in regard to the way I conduct my business affairs says Billy. I’m extremely careful to make sure I do everything in a legal, lawful manner.”

Considering the millions he makes every year – just from his sports betting – it might not shock you to hear that Billy Walters has been investigated and charged with multiple crimes over the years. His first was his fine in Kentucky before moving to Las Vegas. Ever since then the authorities have been watching him like a hawk, thinking he makes his money illegally from the likes of money laundering, fraud, mob ties, insider info and so on.

This brings up a short, but interesting story. In 1996 Billy applied for a sportsbooks license with the Nevada Gaming Control Board. He received verbal approval, but before it all went through he got word that he was being indicted on (multiple) money laundering charges. He said in an interview that rogue cops offered to get rid of the investigation and charges in exchange for $500,000. But he refused, and went through 6 years of hell. He came out the other side a free man. The charges never stuck – he was acquitted of all 3 charges.

The feds coming after him isn’t the worst of it, though. Not in my opinion. At one point his life was in danger. This was shortly after moving to Las Vegas in the mid-1980’s. Anthony “The Ant” Spilotro, had someone ask Walters to meet him on his behalf. Walters said, “And I knew what that meant, and that’s when I left town. I left town the next day.” He didn’t return to Nevada until after Spilotro was found dead in June, 1986. And he said he wouldn’t have come back otherwise. He hasn’t had his life threatened again (that we know of), but he still routinely faces charges from authorities. If it’s not one thing, it’s another.

As of today he’s in the middle of an investigation that also includes pro golfer Phil Mickelson and investor Carl Icahn. They’re being investigated for using insider information to make trades of Clorox stock – with knowledge that there were discussions of the company being acquired. The IRS is snooping around, too. According to Nevada law, bets cannot be made on the behalf of others for tracking (tax) purposes – unless you tell them who the bets are for. (And that’s a no-no since few books will take Walters’ action.)

But Robert Walker, a present day member of the ACME Group Trading (Walters-owned) pleaded guilty to a violation of record keeping and procedures. He got in trouble for betting $72,000 at the Golden Nugget between March and April 2011. He didn’t tell them he was allegedly placing bets on behalf of Billy Walters. The Golden Nugget asked Walker about it – and he denied it – but the IRS thought he was lying. So they started an investigation. But that’s just a normal work day in the life of Mr. Walters.

Walters Wins Some, and He Loses Some

“…no one said anything when I lose money or when I am not successful, and certainly that has happened…” Billy doesn’t earn his money only from sports betting. He has other businesses, too, which include multiple car dealerships, golf courses and stocks. The car dealerships and golf courses make him money, but stocks is one of those areas he admits to not doing so well in.

But, admittedly, that’s another area they don’t do so well in. According to him, all but one or two homes they lost money on. That’s because he says they always set a budget for his wife, but she blows right past it buying high end stuff. At the same time, though, that’s what makes these houses unique and worth buying. These losses haven’t hurt Walters too much, though. They still earn millions of dollars each year. Plenty enough to afford a private jet, several homes and the ability to give back to their favorite charities.

“Scott has taught Bill and Susan so many lessons,” Smith said. “In typical Bill Walters fashion, it has become a win on so many levels.”Walters and his wife donate both their time and money to multiple charities. It was during one of these events they caught the attention of Linda Smith from Opportunity Village. Opportunity Village gives people with special needs the skills to find jobs.

When Linda first reached out to him 25 years ago for a potential partnership, she had no idea that Scott – Billy’s 40 year old son – has the mental capacities of a young child. As a small boy he was diagnosed with brain cancer. His parents had to choose between removing the tumor which would destroy part of his brain or leave it and Scott would die.

So this request hit real close to home. So close, in fact, that when 60 Minutes requested to do an interview in 2011 Billy insisted they include Opportunity Village. It has become a major win for everyone – lots of donations and interest came in following that piece. And Linda says that the experience has taught Billy and now-wife Susan tons of lessons. And, like many things Billy does – minus the house flipping and stock trading, of course – it’s come out a win. “We are so very fortunate to have a man like Bill Walters on our side,” she added. “He is a guardian angel and our champion.”

Update 07/28/2017: Read about the close of Walter’s inside trading case here: Sentence Handed Down In Billy Walters Case

Update 04/03/2017: Follow this link for the latest news story about Phil Mickelson Paying almost $2 million to Billy Walters for a gambling debt.

Update 05/21/2016: Check out the following link if you are looking for the recent news story about Billy Walters being arrested for insider trading.