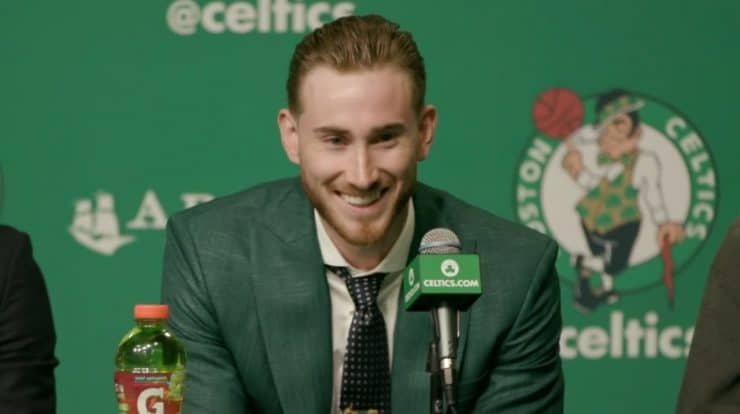 The 2017/2018 season held a lot of promise for the Boston Celtics, but all that vanished when new signing Gordon Hayward went down with injury in the first quarter of the season opener against the Cleveland Cavaliers. This news comes as a shock to fans and analysts around the league, and puts the Cavs in pole position to clinch the Eastern Conference.

The Cavs ended up winning the game 102-99, and Celtics coach Brad Stevens confirmed to the media that Hayward broke his left tibia and dislocated his ankle. It is unconfirmed what the medical follow-through will be, but Hayward will likely be out for the rest of the season after undergoing reparative surgery.

Boston acquired Hayward from the Utah Jazz in what would be one of their marquee singing. Hayward emerged as a top player in the West and had his pick of teams in the offseason. He opted for reuniting with his college coach, which was probably the smarter move seeing as the Western Conference is already loaded with talent. The Celtics also added Kyrie Irving via a trade with the Cavs, cementing them as a formidable threat in the Eastern Conference. They gave up Isaiah Thomas, Jae Crowder and Ante Zizic in the controversial trade, but Irving provides a younger option that wouldn’t cost as much.

In the long-term, Boston are still poised to be strong opponents to the Cavs. They signed Hayward to 4 years for $128 million. Pending his successful recovery, he will be back to prove his doubters wrong. Paul George suffered a similar injury a few years ago and bounced back. As for Irving and the rest of the team, they will have to put this behind them and press on if they want to be successful.

This obviously changes things from a betting standpoint. All of the betting lines at USA sportsbook sites will adjust to reflect the change, most likely putting the Celtics at a lesser chance of reaching the NBA Finals. Still, the Celtics are one of the better teams in the Eastern Conference. Fans interested in betting on the Celtics, or any other NBA team, are encouraged to check out legal online sports betting options that are USA friendly. If you have ever been curious about betting on sports online, there are a few sports gambling laws to consider, though there are still legal options for all sports.

Boston was never favored to win over Cleveland, but they were a close second. It is unfortunate that fans will not get to see this newly assembled roster in action, but you can expect the Celtics to be back in full force next season. Hayward’s presence will be missed, but Irving has enough skill and experience to carry the team. After all, he did switch teams to make his own name and not live in LeBron’s shadow. Whether Boston will be able to cope remains to be seen, but they will be playing to honor Hayward, and that may be the extra spark needed to make an impact.