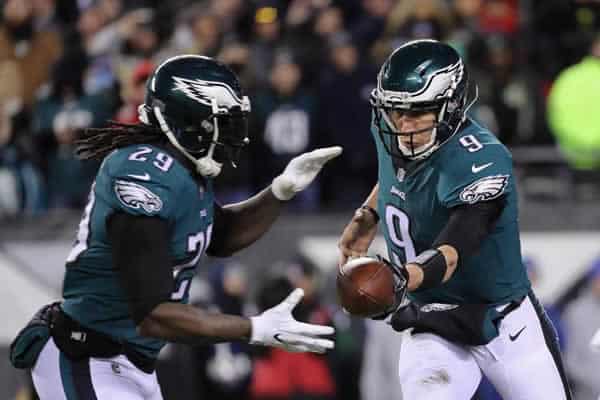 The Philadelphia Eagles have emerged as the strongest team in the NFC with their spot in Super Bowl 52. They bested the Atlanta Falcons and Minnesota Vikings in the postseason and are looking to cap off their season with a win against New England. Most USA sportsbook sites have them as the underdogs, but they have managed to win each of their postseason games under the same betting odds. The NFC was a lot more competitive than the AFC this year, and there are several teams that were knocking on Super Bowl 52’s door, but have the Eagles locked down the NFC? Signs seem to be pointing to yes.

The Eagles finished the regular season 13-3 and won the NFC East Division. Their division was made up of some of the weakest teams in the league, including the Washington Redskins and New York Giants. In the other divisions, the LA Rams, Minnesota Vikings, New Orleans Saints and Carolina Panthers finished as the largest threats. The Seattle Seahawks, Detroit Lions and Atlanta Falcons came close, but couldn’t finish out.

This postseason, the Eagles entered as the top seed but were still discounted because of QB Carson Wentz’s absence. Wentz helped lead the birds to the Super Bowl. In only his second year in the NFL, Wentz amassed 3,296 passing yards and 33 touchdowns on 265 completions. He had a phenomenal second year and was setting new records. He tore his ACL in a game with Rams, causing Nick Foles to go in. Foles was drafted by the Eagles but eventually traded after coach Chip Kelly saw no future for him. He found his way back to Philly after stints with the Rams and Chiefs and has been playing well under the limelight.

Even if the Eagles do not win the Super Bowl this year against the Patriots, they are poised to reign in the NFC. Wentz will be back from injury, meaning he can continue shattering records and have a full season with the team (barring any more injuries). If Philly can retain their roster, they’ll be ready for anything, including the return of QB Aaron Rodgers for Green Bay. They have the best offensive line in the league, a top defense, multiple talented running backs (including a promising rookie) and a deep receiving corps.

A lot of things will likely change this offseason regarding their division. The Cowboys will have RB Ezekiel Elliot back in rotation. With a full roster, the Cowboys will make another push for the postseason. The Redskins may cut ties with QB Kirk Cousins and the Giants may lose QB Eli Manning, meaning both teams may be looking at rebuild phases unless they can sign a star player.

In the NFC West, the LA Rams will come back stronger and with Playoff experience. The Seattle Seahawks are already a good team, they just need to execute better to not lose games. The Arizona Cardinals are looking at a rebuild, so they probably won’t be much of a factor. The San Francisco 49ers looked good under new QB Jimmy Garoppolo. Perhaps he can help bring the franchise back into contention.

The NFC North will be the most interesting since Aaron Rodgers will be back for Green Bay. The Detroit Lions will have a new coach in Matt Patricia (Patriots DC) and the Vikings will be back with QB Teddy Bridgewater or Sam Bradford. The NFC South will also be interesting and probably the most competitive division. 3 of those teams made the Playoffs this year and the Bucs are missing a few key pieces that they will address in the offseason.

There will be some competition, but the Eagles have one of, if not the most well-rounded team in the league right now. The front office should do everything they can to keep the roster and staff intact in the offseason, regardless of if they win or lose Super Bowl LII. If this Eagles team stays put, Super Bowl betting lines for NFC teams will be skewed in their favor.