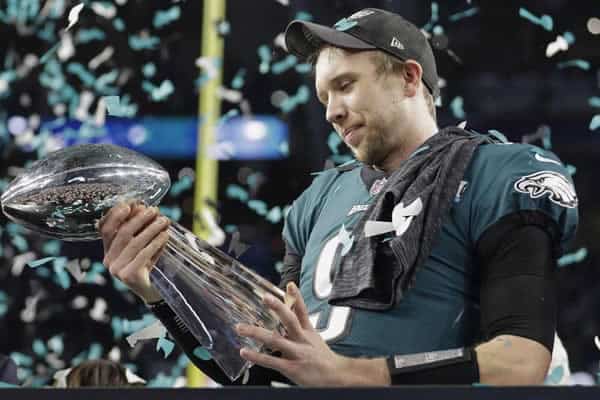 Super Bowl 52 saw an incredible 41-33 victory for the Philadelphia Eagles over the New England Patriots. While the Eagles may be celebrating their first-ever franchise championship, New England fans and sportsbooks are lamenting their loss. Vegas sportsbooks are reporting massive losses, especially on props. USA sportsbook sites also took some losses, but that is the way it goes regarding sports gambling.

Most sportsbooks had the Patriots winning by at least 4.5 points. They were the favorites in the moneyline bet and the total was set at 48 points. In the weeks leading up to the game, the media hyped up both teams, but the consensus seemed to be that New England would come out on top, despite Philadelphia having a top 5 offense and defense. It wasn’t until days before the game that people began to talk about the Eagles having a chance.

Despite the media, Super Bowl betting sites began reporting that more wagers were coming in for Philadelphia rather than New England. Even though New England was favored, the majority of bettors seemed to believe that the Eagles had a realistic shot of winning. The skew became so significant that sportsbooks narrowed the point spread to try and attract more bets on New England. This would level things out and prevent a total loss should Philadelphia win the game. However, as we saw on Super Bowl Sunday, things played out a little differently than expected.

By halftime, the combined score was 34. This meant things did not look good for the under bet. The way these offenses looked, one might feel safe, but it became a shootout in the second half of the game. By the time the dust had settled, sportsbooks were reeling from the amount of over bets that hit, not to mention big money bets on the Eagles to win. For example, a mystery bettor wagered $3 million at MGM for the Eagles to win. At the proposed odds, the bettor walked away with somewhere in between $4.5 and $5.4 million.

Props were the biggest killer for sportsbooks. Most prop bet surrounding offense hit, including total yardage per player. Tom Brady and Nick Foles had a combined 878 passing yards. Add on each team’s rushing gains and you’ve got over 1,000 yards total offense. If anyone wagered that another player besides the 2 quarterbacks would throw a pass also hit, as both teams had trick plays involving outside throwers. Most over player props hit, especially with Philadelphia, so if you kept your betting on the Philly side you ended Super Bowl Sunday a happy camper. CG Technology, another sportsbook, reported they took a major loss on an alternative point spread wager where the Eagles were -7.5.

Super Bowl 52 showed the unpredictability of the NFL and football betting as a whole. It was a magnificent game that came down to the wire, with bets hitting all along the way. The sportsbooks were hoping for a Patriots victory to offset all the Eagles wagers, but it seems it is their turn to pay up. You can rest assured that Philadelphia will not be taken so lightly at the start of next season. In fact, they may even be favorites to win Super Bowl 53.