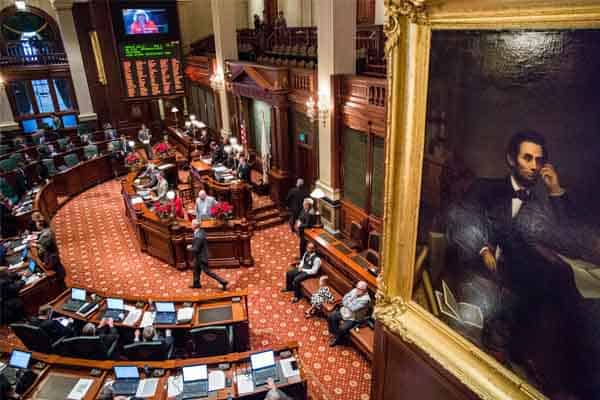 Illinois looking to revitalize Chicago and other under-funded cities with gambling revenue.

Illinois has had a pending sports gambling bill in its legislative session since the beginning of last year when Representative Robert Rita introduced Senate Bill 7 in January of 2017. The bill had been stalled and entered legislative purgatory. However, the potential for new political makeup after the midterm elections has revived conversations in Illinois regarding expanded gambling.

SB 7 included provisions to allow electronic gaming machines, casinos, and riverboat casinos. Based on speculation, SB 7 and other introduced gambling bills seemed to fail in legislative sessions due to internal conflicts between legislators and Illinois political figures. Chicago Mayor Rahm Emanuel did not approve of a Chicago casino and shared his distaste for video gaming machines which provided friction to SB 7’s passing.

Chicago is the nation’s 3rd largest city by population at approximately 2.7 million people and has no gambling opportunities within its city limits. The mass amount of potential gambling revenue lost due to these internal conflicts is unfathomable. A silver lining – Mayor Emanuel is not seeking a third term in office, allowing for a new Mayor to reconsider gambling opportunities in the city.

With the upcoming midterm elections rearing its head in November, Illinois may have the potential for a new governor which could add in support to expanded gambling in the state. Officials have publicly spoken on the possibility of offering sports betting, six new casinos, and internet casino gambling. A hearing to discuss sports betting opportunities in Illinois is set for October 17th, 2018 In Springfield, Illinois to gauge the receptiveness of legislators for expanded gambling.

Founding partner of the CLG Casino Law Group in Chicago, Cory Aronovitz predicts 2019 legislative sessions to see a push toward expanded gambling with bills which would include offers such as sports betting, iGaming, and Daily Fantasy Sports. These new bills could even revive and reintroduce aspects of SB 7 such as establishing a Chicago Casino Development Authority.

Illinois Representative Lou Lang has shared his support for expanded gambling in the state. In the same token, Representative Lang predicts the state will need to follow similar conditions presented in the Video Gaming Machines Act where cities or local government jurisdictions may opt in or out of state gambling offers for their city limits. This allows cities who do not want these gambling offers to maintain their rights to exclude their participation in such.

In view of Mayor Emanuel’s departure from Chicago city politics, any new Chicago Mayor candidate would need to consider how they could economically revive the city. Viable solutions could present the city with new life and surely gambling revenue could do such. If gambling were permitted in Chicago, a new revenue-sharing and tax structure would need to be implemented to ensure money goes to the local city government.