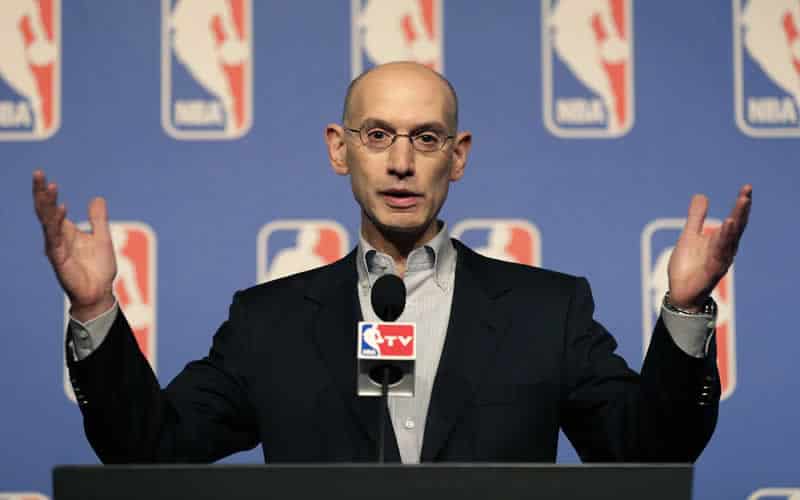 Sports betting in the United States has long been blocked by the NFL, NBA, NHL, MLB and NCAA. Over the years, some sports leagues have come out in support of legalizing sports betting. The NBA has been the most outspoken under Commissioner Adam Silver, who even went so far as penning an op-ed in the New York Times regarding sports betting legalization. However, his words do not carry much weight given the inaction towards anything significant. This begs the question: Is the NBA a friend or foe of sports betting?

Each time a state has tried to introduce some form of sports betting, the major leagues step in with a lawsuit. There are even instances where they have cut off states that are legally allowed to host sports betting in order to pressure them to stop doing so. The most recent example of their influence is with New Jersey. The Garden State tried passing a law that authorized single-game sports betting in the state’s casinos and racetracks. This decision was met with swift resistance in the form of a lawsuit from the major domestic sports leagues. As a result, the law was suspended and New Jersey entered in what has become a very long appeal process. The case has made its way up to the US Supreme Court and is expected to be heard later this year. SCOTUS’ involvement suggests that it is possible for NJ to win their case and for the Professional and Amateur Sports Protection Act (PASPA), the federal ban on sports betting to be repealed, but only time will tell.

The entire debate is full of contradictions. The NFL and NHL have both introduced franchises in Las Vegas, the sports betting capital of the nation. MLB Commissioner Rob Manfred has made comments hinting towards his league taking steps to prepare for sports betting. NBA Commissioner Adam Silver has been adamant about sports betting reform and the benefits a legalized framework could bring. Here’s the kicker—no sports league has pulled out of the lawsuit against New Jersey.

If Commissioner Silver truly believes in sports betting legalization, he should pull the NBA from the lawsuit. This would send a clear message to the sports gambling community that the NBA is fully prepared to do their part in establishing regulations for legal betting on basketball games. As of now, sports betting is done through licensed offshore providers or illegal bookies. In his op-ed piece, Silver even alludes to the fact that sports betting is rampant in the US and should be regulated in order to secure revenue from the multibillion dollar industry.

Even in light of the Supreme Court’s decision to hear the case, Commissioner Silver has been quiet regarding his league’s status. It is certainly hypocritical to put your opinion into writing and then not back up the claims you are making, so the NBA is in a bit of an awkward position. In any case, the NBA, along with all the other leagues, will have to support sports betting should SCOTUS rule in New Jersey’s favor. This case seems to be more so innovation versus pride than New Jersey versus the major leagues, but the tide seems to be moving in favor of sports gambling legalization.