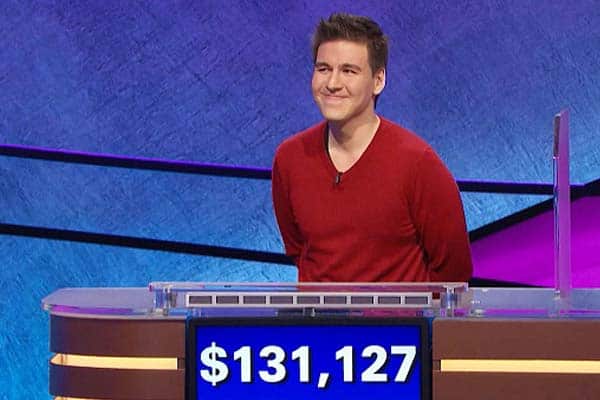 “This professional Las Vegas sports bettor has used mathematical probabilities to win $1,329,604 in 18 days on Jeopardy!”

“Who is James Holzhauer?”

It’s been quite the month for 34-year-old sports gambler, who won his 18th straight game Monday night by just $18.

And calculated is the best way to describe Holzhauer’s record-breaking performance so far.

Additionally, he’s become only the second contestant in the game show’s 35-season history to win more than $1 million during the regular season, taking only 14 games to reach.

Now, all eyes will be on Holzhauer to see if he can challenge the all-time records held by Jeopardy! legend Ken Jennings, who won 74 games in a row and earned $2,522,700 in his 75 game show appearances in 2004.

While surpassing Jennings’ win total might be a bit of a longshot for Holzhauer, needing 56 wins to tie, the total earnings record is much more like to be broken.

Currently, he’s averaging $73,867 per win through 18 games, and if his average remains constant, then he could break the record during his 35th victory — under half the time it took Jennings.

But how is Holzhauer winning so dominantly and does his experience in sports betting help him in any way?

You bet it does.

The first thing unique to Holzhauer strategy is to start at the bottom of the board, picking the most difficult and highest valued $1,000 questions.

Contestants traditional start with the $200 question and work down, but Holzhauer’s method allows him to increase his bankroll as fast as possible.

Once he’s got a sizeable total, he then begins hunting for the Daily Doubles, which gives him a chance to double his lead with a first-round bet that almost always 100% of his total up to that point.

His aggressive style is far different than the more traditional risk-averse style of play commonly seen on the show.

Holzhauer is confident with every bet he makes, which stems from earning a bachelor’s degree in mathematics from the University of Illinois and years of experience as a pro sports gambler in Las Vegas.

Knowing how to properly assess risk in real-time and not being afraid to lose a wager are two cornerstones to Holzhauer’s play, since to him, there’s no such thing as a bad bet when you only wager when the probabilities of winning are in your favor.

In sports betting, this is what’s known as “expected value” or “EV” and is essentially the assessment of how a single bet performs over a long period of time and with large sample sizes.

Basically, while the bet may lose initially, that same bet will earn profit over an extended period of time when calculated correctly.

Calculating the EV a sports wager is difficult due to a myriad of factors in play for a single matchup.

But Holzhauer knows he’ll be right much more often than wrong.

In fact, according to The Jeopardy! Fan, Holzhauer has answered correctly on 96.4% of his responses.

Beating other contestants to the buzzer also plays a major factor, something Holzhauer does 56.96% of the time.

He obviously knows his stuff, but what’s his secret to gaining so much knowledge of facts on the questions being asked? Well, it’s certainly not what you might think.

“I have a strategy of reading children’s books to gain knowledge,” Holzhauer said in a New York Times interview. “I’ve found that in an adult reference book if it’s not a subject I’m interested in, I just can’t get into it.”

“I was thinking, what is the place in the library I can go to to get books tailored to make things interesting for uninterested readers?” he wondered in preparation for the show.

Holzhauer’s’ success has definitely brought attention toward taking a mathematical approach and applying knowledge of EV, probabilities, and risk assessment will greatly increase the chance you win a wager on sports or multiple games of Jeopardy! — both in his case.

This is a great thing as sports betting becomes more of a mainstream pastime because it will likely lead to people doing research on his success and hopefully makes smarter bettors in the market as a whole and curb the negative effects that problem gambling can have when being responsible is put on the backburner.

It’ll be interesting to see how far Holzhauer goes and whether he can break Jeopardy!’s all-time records, but for now, at least, he’s setting a historic pace.

He’ll try to win his 19th straight game tonight, but just don’t doubt or think for a second that Holzhauer’s odds of winning are in Jeopardy!

After all, he’s already proven that the odds are in his favor.