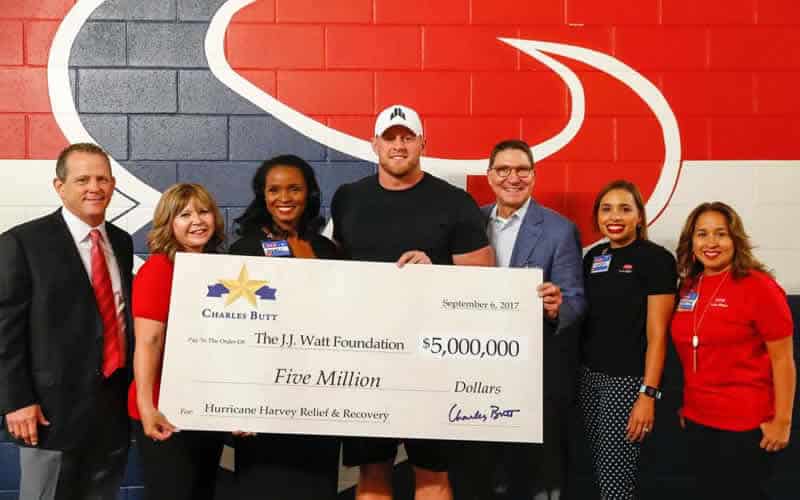 In wake of what has become the largest tropical downpour in U.S. history, a charitable donation fund has exceeded $15 million. The YouCaring Fund, started by Houston Texans defensive lineman J.J. Watt, was originally intended to raise $200,000. However, Watt managed to raise over $4 million in 48 hours. This support this campaign has drawn is unprecedented (exceeding $15.4 million as of this writing) and is a testament to the human spirit. The current goal for the relief fund has increased to $20 million.

Watt’s campaign has received donations from upwards of 90,000 people, including sizeable donations from notable figures. Ellen DeGeneres, comedian and daytime TV host, pledged $1 million with the assistance of Walmart to the fund. Tennessee Titans owner Amy Adams Stunk also donated $1 million, despite the Titans and Texans being rivals in the same NFL division. Houston Rockets guard Chris Paul donated $50,000. Many other celebrities have contributed to the relief fund. Former President George H. W. Bush promoted the campaign on Twitter, leading to more contributions.

The former Wisconsin Badgers player has kept followers updated on the status of the fundraiser through social media, particularly Instagram and Twitter. He raised the goal throughout the week, from $1 million to $2 million, 2 to 4, 4 to 6 and so on. In his video updates, he thanks everyone for donating and sees it as a sign of the best in humanity. Watt promoted the fund on CNN, CNN International and CBS. His charitable foundation, the J.J. Watt Foundation, has shifted gears from funding after-school athletic programs to helping Hurricane Harvey relief.

Hurricane Harvey has left the southeast region of Texas devastated. There has been rampant flooding and a torrential downpour over the last week. The damage to the area is drastic, and will be costly to repair. Luckily for the city of Houston, which received the brunt of the damage, this relief fund will provide great assistance. Tens of thousands of people had to flee their homes to find refuge. Watt has promised that this money will go to good use. One of his first goals is to begin providing drinking water for victims.

With over $14 million raised, the campaign looks poised to continue growing with each day. This is a vast improvement from the original $200,000 goal—over 50 times the original goal, in fact. Watt started things off with a $100,000 donation, and as you can see, many others have followed suit. The Texans are currently located in Dallas for preseason action, with their last game taking place there against the Cowboys. Watt has pitched the idea of turning the game into some sort of fundraising event for Houston, and the NFL will likely go for this idea. The Texans, along with donating to the fund and promoting relief efforts, have decided to dedicate their upcoming season to the resilient citizens of their town. Watt’s relief fund will continue to grow, and soon enough the city will begin the laborious process of rebuilding. For now, the aim is to keep building momentum in terms of donations and relief aid.