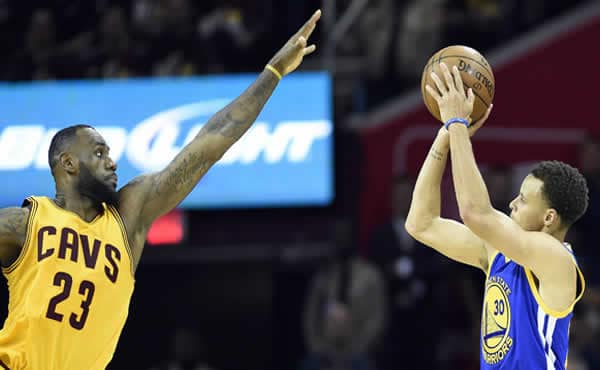 When we say NBA Finals rematch who are the first teams that come to mind? If you guessed Cleveland Cavilers and Golden State Warriors, you would be 100% correct. These two teams matching up are the modern-day Bulls vs. Suns or the Lakers vs. Celtics, however, you want to line them up. Last year we saw the Cavs and the Warriors meet in the finals for the third time in a row. It was a match-up that made history since two teams have never been to the finals 3 years in a row.

The Golden State Warriors are often called the Dream Team of the 2010’s and for good reason. While calling them the dream team might be a little much, there is no argument that they have a stacked line-up and one of the best basketball teams that have ever played. 2-time league MVP Stephen Curry, 1-time league MVP Kevin Durant, Klay Thompson, Draymond Green, and Zaza Pachulia. Many analysis say that Golden State is the best basketball team they can remember and with 2 out of 3 championships in the last 3 years it would be hard to argue with them. Golden State is known for their shooters, Durant, Curry, and Thompson. Many people argue that a good team with any one of those players could easily win a championship, but Golden State has all three. With the recent addition of Kevin Durant, Golden State is almost guaranteed to make the playoffs every year.

The Cleveland Cavilers are still in contention for another title run after squeaking by the first round of the 2018 NBA playoffs due in part to their star player LeBron James. The Cavs have also been to the finals 3 years in a row and are hoping to make it back a fourth time. They managed to steal one championship from Golden State in the three attempts, but it wasn’t easy for them. In the 2016 NBA Finals, the Cavs had to come back from being down 2 games to eventually win the series in game 7. Not only did they barely pull off the win, but they also look exhausted. In the 2017 NBA Finals, Golden State jumped out to an early lead with three straight wins and took the series in game 5. There is no doubt that Cleveland wants another chance to even the overall NBA Finals series, but they still have some work to do if they want to get there.

I don’t think anyone would argue the possibility of a 4th rematch. Golden State is looking like they are going to cruise to the Finals and the Cavs, while they barely won the first series, still have many people who have grown to expect LeBron to take them to the Finals. After the Cavs first series in the 2018 NBA playoffs, it is apparent they will have to work harder for the chance to meet Golden State in the Finals.

History In The Making

While last year we saw history unfold before our eyes, we might be in for the same treatment this year if both Cleveland and Golden State reach the NBA Finals for a fourth consecutive year. It is highly unlikely but so was a two teams meeting 3 years in a row. The option is still on the table, but it is looking like Cleveland will have to work hard to obtain that goal. There are definitely no clear forerunners on who will win the Eastern division, but most gamblers would put their money on Cleveland. If the two teams do meet again in the 2018 NBA Finals, you can bet that Cleveland will be playing with something to prove, but will it be enough.

For The Sake Of The Game

Some fans say that seeing the same two teams make the Finals every year is hurting the game. Yes, there are a few teams that have a much higher probability of making the Finals than do others but that is true with any American professional sport. Luckily for fans, it comes in waves and usually changes teams every few years in most sports. This match-up is different, in my opinion, it is the best modern-day basketball player (LeBron) up against the best modern-day basketball team (Golden State), and I also believe we are watching a golden era of basketball.

Since sports betting in the USA is only available in a few states and not very well constructed, basketball fans often turn to online sportsbooks. Online you can bet on anything and much of the same is true with basketball. Online sportsbooks offer different types of bets including money line, over/under, prop bets, future bets and more. Pair those options with online sign-up or reload bonuses and you have a mutually beneficial sportsbook. While betting on basketball isn’t for everybody, for the fans wanting to get closer to the game, and that know their stuff, it is a great way to get involved and win some money.