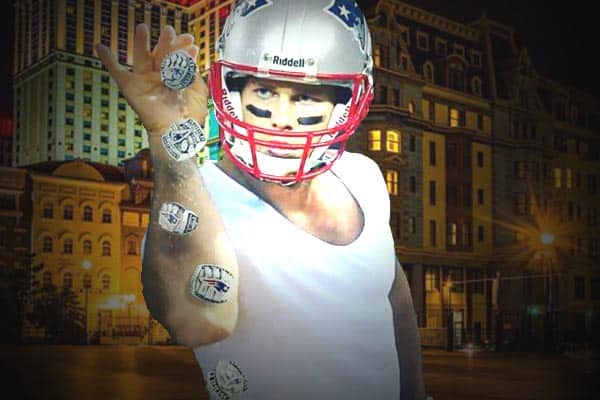 Domestic sportsbooks in Mississippi, New Jersey, and Nevada have reported that approximately $185.5 million was bet on Super Bowl 53 at their sportsbooks. This was the first year sports betting revenue numbers have been down for Los Vegas since 2015.

98.3 million people tuned in to watch Tom Brady and Jared Goff battle it out in Super Bowl 53. While most of the oddsmakers and fans favored the Patriots not many people could predict that the Rams would only score 3 points and that this Super Bowl would be the lowest scoring SB ever.

In the end, the Patriots would win by a margin of 10, fulfilling what most fans predicted and forcing domestic sportsbooks and USA online sportsbooks to pay out the over, which was generally set at (-3) Patriots.

Nevada released revenue figures to the public last Monday and showed that roughly $145 million was wagered across 200 state-based sportsbooks. The report for 2018 is about $12.65 million less than reports from last year’s Super Bowl.

Jay Kornegay, the vice-president of race and sportsbook operations at Westgate Los Vegas told reporters that the Super Bowl was a solid day for sportsbooks. He went on to say “It wasn’t a bad day or a great day, it was right in the middle. “

In 2018, the Supreme Court repealed the PASPA act that outlawed state-regulated sports betting. Since then many states have been taking the appropriate actions necessary to enact sports betting laws in their state.

To date, there are seven states that are currently accepting bets on sporting events: Rhode Island, Delaware, Mississippi, New Jersey, Pennsylvania, West Virginia, and New Mexico. With more than 20 other states looking to pass domestic sports betting laws in the near future, legal sports betting states are expected to grow by 2020.

According to New Jersey gambling regulators, the state lost approximately $4.6 million USD when they had to pay out over $39.5 million to winning bettors. They also claimed that most of the bets were on the Patriots to win. Joe Asher CEO of William Hill US said that Super Bowl 53 was “by far their busiest day ever in New Jersey in terms of handle.”

DraftKings who recently launched their mobile sports betting app and controls the sportsbook at Resorts casino also had a record-breaking day. The company stated that they paid out about $11 million and small loss of barely seven figures.

Prop bets were popular this Super Bowl and some NJ casinos are saying they did well on the props but no so much on the game. The Westgate and William Hill both took a huge prop risk that nearly backfired by offering a betting line for no touchdown scored all game at 500 to 1, and 300 to 1 odds.

While the majority of New Jersey casinos did lose money on Super Bowl 53, most state-based sportsbooks walked away happy knowing that sports betting is growing traction across their state.