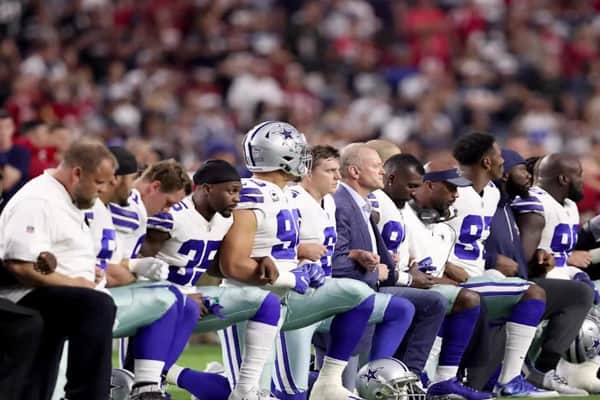 For the past two seasons, players kneeling during the National Anthem has become a mainstay much to the chagrin of some fans, sponsors, and owners. NFL viewership has been down the past couple of seasons, translating to a loss in revenue. Some believe the kneeling protests are to blame, that the NFL has become political and moved away from its sole purpose of football entertainment. The league has since decided to take a stand on the protests by issuing a rule that all players must remain standing while on the field when the National Anthem is playing.

As you can probably imagine, the policy has sparked major controversy on both sides. The league claims that it is being sensitive to players’ right to protest by allowing them to stay in the locker room while the anthem is playing. However, some feel that this rule takes away players’ Constitutional rights. They think it also serves to limit the meaning of the protest, which is aimed at perceived racial inequality, especially in regards to law enforcement towards African Americans. Players are also at financial risk because they and their teams will be fined if anyone kneels during the playing of the National Anthem.

It was initially reported that owners unanimously voted on the rule change. Now, reports say that there never was a formal vote, which is the policy for these types of matters, but rather a poll issued out amongst the owners. The league assumed that the owners would follow this policy. This seems more like a smokescreen that the owners can use to distance themselves from the controversial policy change. After all, the decision is being picked apart by sports media talking heads left and right. 49ers owner Jeff York stated he abstained from the poll. Raiders owner Mark Davis echoed that same stance. Jets co-owner Chris Johnson offered to pay the fines of any player that kneels during the National Anthem.

The NFL looks like they jumped the gun on this and now the owners are pushing for damage control. President Trump was supportive of the move. He stated in an interview with Fox and Friends that he actually believes players should not be given the option to remain in the locker room. With all of the controversy surrounding Trump and the amount of flack this policy change has gotten, perhaps the President’s support isn’t exactly what you want if your Roger Goodell.

In the same day this news broke, the story has changed. We will provide updates on the rule change as they play out. It is unclear whether this rule stands heading into the season. The NFL Players Association denounced the change and just about every media personality is taking the liberal approach that this violates players’ rights as citizens—not as employees.