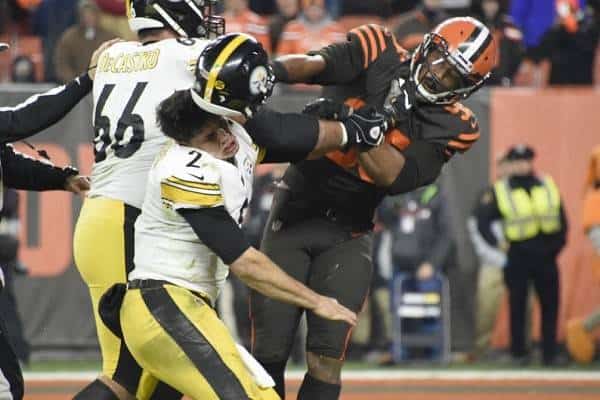 Week 11 in the NFL was, without much pomp and circumstance going in, perhaps the biggest – and cringiest – of the season so far.

Across the board, oddities and unpleasantness for bettors and fans alike made up the predominant storylines. Except for Lamar Jackson’s, whose storyline was just a dominant one as he all but wrapped up the MVP award with a third of the season left to play.

Otherwise, for bettors and fantasy players, this week in the NFL had a little bit of everything: an unprecedented on-field assault, an embarrassing marketing stunt, a horrendous bad beat, another inexplicable officiating error on blatant pass interference, and a goose egg from the GOAT.

Unless you’ve been living under a rock, you’re already aware of the melee at the end of the Steelers-Browns game on Thursday Night Football to kick off the week. For some reason, Browns DE Myles Garrett was so offended by his own unnecessary roughness on Pittsburgh QB Mason Rudolph that he ripped Rudolph’s helmet off and beat him over the head with it:

While Garrett has been suspended indefinitely by the league, the NFL isn’t exactly known for its just approach at meting out meaningful punishment.

If Roger Goodell and company don’t come down hard on Garrett and ban him late into next season, it will be viewed as a tacit endorsement of the kind of violence never before seen on a professional football field. It’ll be interesting to see how seriously the league actually takes the whole concussion narrative in the aftermath of Garrett’s aggression.

While the Steelers-Browns brawl hasn’t yet been christened with a catchy name for posterity (think “Malice at the Palace”), it’s only a matter of time until such a moniker catches on.

Not to be left out of the festivities, the ever-controversial Antonio Brown chimed in on Twitter:

And then there’s this:

Incidentally, the above meme offers an excellent segue into the next NFL embarrassment on the list.

The Kaepernick “Try Out”

Saturday was dominated by news of former NFL quarterback Colin Kaepernick’s hyped football “try out.” More than 25 teams sent scouts and representatives to watch Kaepernick run through a series of drills.

The show – which is all it really turned out to be – was scheduled to be put on at the Falcons’ facility in Atlanta, but just minutes before the event, Kaepernick’s marketing arm opted to reject the NFL’s typical tryout waiver and made demands to livestream the private exhibition on YouTube.

As a result, Kaepernick moved the event to an area high school, and only between five and eight NFL teams followed to have a look at him.

Per ESPN’s Stephen A. Smith, Kaepernick clearly “doesn’t want to play.” (Of course, for anyone paying attention over the last three years or so, this isn’t really news. Kaeptain America has found a far safer and more profitable career as a fake victim in a society that elevates that status even higher than its typical athlete hero worship.)

Unfortunately, it didn’t seem to matter in Sunday’s anticipated matchup between the Texans and Ravens in Baltimore.

After stifling MVP runaway front-runner Lamar Jackson for much of the first quarter, Deshaun Watson aired out a bomb to wide receiver DeAndre Hopkins in the endzone. Except Hopkins was absolutely mugged by Marlon Humphrey, and the no-call was challenged.

Jaw-droppingly, the NFL’s replay official upheld the no-call, proving that the rule is a rule in name only, and the NFL has no interest in second-guessing its officials when it comes to “judgment calls.”

The Ravens, who were 4.5-point favorites going in, would go on to trounce the Texans 41-7. Many will argue that the no-call had no effect on the game, but had Houston gone up in the first, there’s no telling how the remainder of the contest would have played out.

A Bad Beat For The Ages

For bettors – at least the ones who aren’t in the Brown’s futures market – the biggest event of the weekend wasn’t Garrett’s Thursday night meltdown and the implications on the boards for both Cleveland and Pittsburgh going forward. Instead it was the bad beat suffered by Cardinals bettors in Arizona’s road game against the 49ers.

Most US sports betting sites had the matchup favoring the NFC West-leading 49ers at -9.5 against the basement-dwelling Cards. With the score sitting at 30-26 with two seconds left to play, Arizona had the ball at their own 22-yard line. After a failed lateral and a cartoonish series of fumbles including some sort of bizarre punt, the 49ers picked up the ball and ran it into the endzone.

The final score? 36-26. The Niners covered, and Cards bettors went from a nice payday to a heartbreaking loss in record time. One prominent sportsbook, Caesars in Las Vegas, called the outcome the “worst case scenario” for their own bottom line, though the venue didn’t report how much money they lost on the game-ending turn of events.

Tom Brady hasn’t been having his best season, which is something most analysts, fans, and football betting faithful likely expected. Still, the Patriots, at 9-1, are atop the NFL power rankings thanks to their historically good defense. And to be fair, the Pats are without the recently-retired Rob Gronkowski and currently have an unstable receiving corps.

Nevertheless, the Patriots covered the spread, as they closed as 4.5-point favorites and won 17-10 after being down 10-0 early.

Fantasy players, on the other hand, took a beating if they started Brady, who racked up a season-low 8.5 points in most leagues. With the Patriots hitting the toughest part of their schedule now, most DFS players will probably think twice about starting Brady going forward.

Of course, you can never count out the GOAT.

And you can never count out the NFL for delivering the wackiest and most frustrating storylines, week in and week out.