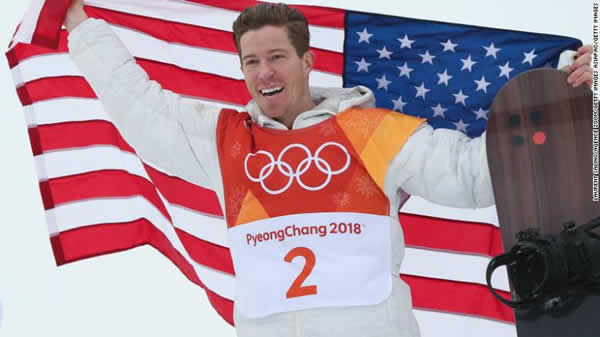 Shaun White, one of the most prominent athletes in US Olympic history, clinched his third Olympic gold medal in the men’s halfpipe competition. Interestingly enough, this was also the 100th gold medal in Winter Olympics history for the United States. At 31 years old, in what will likely be his last Winter Olympics, White secured himself another place in the history books.

With only 1 run left in the competition, White was faced with a choice: either play it safe and win silver, or put everything on the line and go for the gold. He fell on his second run and was on the heels of a solid run from 19-year-old Japanese Ayumu Hirano. White opted for the latter, in true American fashion, and went for the run of his life. White’s gold medal-winning run consisted of his trademark McTwist 1260 and back-to-back 1440s for the first time in competition to put up a score of 97.75. Hirano also put up back-to-back 1440s in his silver medal run, but it wasn’t enough to win him the gold.

White was very emotional as he finished his run, knowing that he just sealed the gold. He credited his competition, saying that Hirano and bronze medal-winner Scotty James pushed him to step it up a notch. He’s thankful for this level of competition because it has allowed him to achieve the things he has.

White’s 2014 Sochi Winter Olympics did not go well. He failed to win and seemed to fall into a depression after. With previous golds in Turin in 2006 and Vancouver in 2010, he was likely used to winning. He decided to pick things back up in preparation for this year’s Olympics in PyeongChang. However, White suffered the worst setback of all when getting seriously injured during a training session in New Zealand. He cracked the lip of the halfpipe and have severe facial damage. It took a total of 62 stitches to repair his face. It was unclear whether he would be able to recover in time. Perhaps physically, but the mental factor after a fall like that can be significant. Somehow, White managed to rehabilitate himself back to his competing ways and pushed through to win his third gold. His coach, JJ Thomas, spoke on the level of commitment and talent it takes to overcome something like that and then compete on the world’s biggest stage.

The USA has been performing well in the snowboarding category, as expected in most USA sportsbook sites. Red Gerard, Jamie Anderson, Chloe Kim and now Shaun White have all won golds in their respective events. The USA is still behind in terms of gold medals, but they have been dominant in snowboarding. White’s victory epitomizes the level of talent we have. It seems only fitting he bring home the nation’s 100th gold medal.