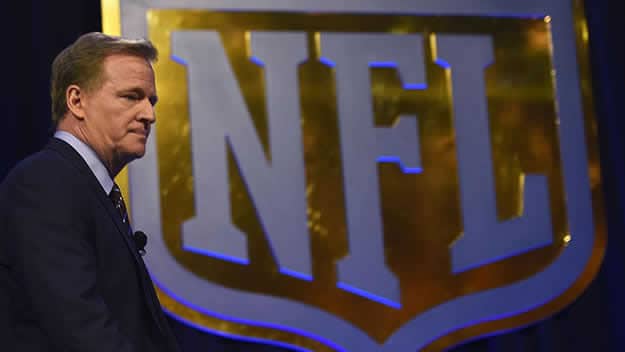 There is no doubt that this year the NFL is dealing with some backlash and losses over the first 10 games of the 2017 regular season. What started this year as America’s favorite game has turned into a political platform for some players and so far, the League has not put a stop to the player protest, however this could change as the network numbers are declining and the viewer ratings have decreased.

According to JPMorgan analyst Alexia Quadrani, “ratings are down in 8 out of the 10 weeks this season” bringing the yearly totals to a reduction of approximately 7% through the first 10 weeks of the season. These numbers might have Wall Street backpedaling as they near the end of the season and networks like CBS and FOX have already cut earnings expectations blaming everything from kneeling during the national anthem to hurricanes. It is estimated that the four major networks that broadcast the NFL games could lose upwards of 500 million in losses this season alone. Surprisingly USA online sportsbooks have not experienced the same types of losses.

NFL Commissioner Rodger Goodall has stated that he believes players aren’t being “disrespectful to the flag” by kneeling during the national anthem before the games but he does believe that they should stand. It’s hard to say if Colin Kaepernick can be blamed, since he is the one who started the trend, but one thing is certain, it has America divided. The situation has resulted in lively discussion among fans and the media: however, the attention being giving to the controversy has not favorably affected the ratings. So far, the league has backed the players and their freedom of expression.

With Thanksgiving right around the corner, Wall Street will be watching to see how the ratings do and assess the losses. Thanksgiving Day football is a tradition that has been played since the leagues conception in 1920 and is as much a part of the holiday as turkey and cranberry sauce is for many Americans. College football schedules some of its biggest rivalry games on Thanksgiving weekend. With most American’s enjoying time off from work and free to watch the games, we will be interested to see how this year’s viewers weigh in despite all the commotion taking place in the NFL. Depending on the networks results, we might see the NFL step in and intervene.

Player protest are not the only controversial situation taking place in the NFL. Last week the Commissioner decided to up hold the suspension of Dallas Cowboys running back Ezekiel Elliot before the Atlanta Falcons game. This decision had Cowboys owner Jerry Jones and Fantasy football fans in an uproar over the fact that it was unexpectedly made 9 weeks into the season. This upset not only affected the Cowboys before a crucial game, but also impacted the betting odds as the standout star running back was benched before the big game.

While the ongoing controversial environment surrounding this year’s NFL season certainly has resulted in reduced viewership and ticket sales, it has not affected football betting levels. Apparently, fans who enjoy betting on football are not necessarily discouraged by these situations, with US friendly offshore sportsbooks reporting no decrease in betting action. In fact, it is suspected that the solidarity present in the teams that are banding together actually drives a stronger performance on the field. It is unknown if it has driven increases in betting entertainment participation, but it certainly has not damaged it.