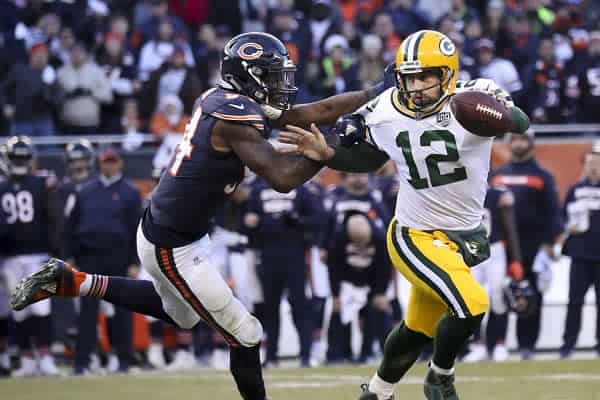 As usual, analysts and pundits expect big things from the Packers and their Aaron Rodgers-led offense. However, the team has an unproven first-year head coach in Matt LaFleur, who joined Green Bay in January. LaFleur has been part of several college and NFL coaching staffs, most recently serving as offensive coordinator for the Tennessee Titans.

Meanwhile, the Bears have reigning Coach of the Year Matt Nagy calling the shots. After going 12-4 in his first campaign with the club, Nagy has positioned the Bears as favorites to win the NFC North. Most USA online sportsbooks agree, giving Chicago +180 odds to win the division. The Packers are nipping at their heels at +185.

Most outlets have flagged tonight’s contest with an “upset warning,” but bettors still seem to be favoring the Bears at home. The game’s 46.5-point over/under suggests decent offensive showings from both clubs, but Chicago’s defense has a tremendous edge. Last year, the Bears D was tops in the NFL, allowing just 17.7 points per game.

Of course, there are 15 other games on the Week 1 docket, and action has been brisk on each one. The main betting lines for all Week 1 games are posted below, and every major sportsbook has dozens of NFL bet types, props and alternate lines available.

Obviously, there’s a lot to choose from in the Week 1 betting schedule, and several of the above lines are very attractive. (If you need a brief overview of the football betting basics, we covered those last week in our NCAAF Week 1 preview.)

Spreads are always tricky, but straight-up, the Eagles should have no trouble dispatching the Redskins, nor should the Seahawks struggle against the Bengals. Given Andrew Luck’s retirement and Philip Rivers’ resurgence, the Chargers should make quick work of the Colts, too. Meanwhile, Jimmy Garoppolo has a lot to prove, and a big win against the Buccaneers could be just the turnaround he needs.

Just remember: Even games that look like sure things aren’t. This is the NFL, after all, and “any given Sunday” still means something.

Even on Thursday night.