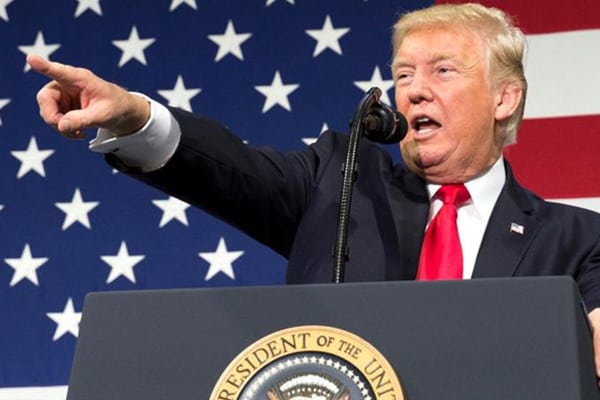 When the NFL announced they were implementing a policy that forbids players from kneeling on the field during the National Anthem, rumors began to swirl that President Donald Trump had a hand in the decision. Multiple owners have stated in depositions that Trump did, in fact, influence the owners’ decision with the new kneeling policy. This means President Trump violated the law to push a political agenda forward through the NFL.

According to Dallas Cowboys Owner Jerry Jones, Trump spoke with him about the National Anthem protests. He told him that the protests were a “strong issue” for him and that they would help “lift” his political angle. Jones went on to report that Trump told him to “tell everybody you can’t win this one.” Miami Dolphins Owner Stephen Ross claims that Patriots Owner Robert Kraft also spoke with Trump regarding the protests.

It is not surprising that Trump used his influence to get this decision across. The President blasted NFL athletes for kneeling during the anthem at a political rally in Alabama. He wanted owners to begin pulling players that were kneeling and also even went so far as to call a player a “son of a bitch.”

The protests were having an effect, though it may not have been their intended effect. NFL players wanted to bring attention to racial injustice in the US. As a secondary effect of the protest, teams were financially injured. The league itself also suffered a sharp decline in viewership. President Trump spun the protests as anti-military, which is not the message the athletes were trying to get across.

Per the new policy, players will be fined by the league and possibly by their teams if they kneel during the anthem. As soon as the policy was announced, Trump was on Fox and Friends offering his support for the NFL’s decision. He also claimed to implant the idea but gave the credit to the owners. Jones testified in his deposition that he didn’t want to give Trump all the credit, but he recognizes that “he’s the President of the United States.”

This news does not bode well for Trump or anybody else involved in the collusion case surrounding ex-QB Colin Kaepernick, the player who started the protest. Kaepernick’s legal team believes league owners colluded against him by not signing him to a franchise because he was too much of a PR problem. Trump’s involvement with this decision helps Kaepernick’s case by exposing league-wide collusion that goes all the way up to the President of the United States. Furthermore, Trump has no legal right to enforce what a company does for its employees.

It has been a nightmare ever since this policy was announced. With this development, it is possible the policy be recanted. As far as legal troubles for Trump, consider this another bullet item on his list.