Think you know the history of your favorite coach or player? Think again, things aren’t always what the seem. We have proof that the very people we have all come to know and love in sports actually have secret identities. Read below as we reveal the truth about some of the top names in sports and the secret lives they live.

In an exclusive media release here, we are revealing the results of an intense investigation that was recently completed by our team of professionals. It is quite possible that we may have just uncovered a highly sophisticated secret identity held by Mr. Dan Marino many years ago. We have it on good authority that during the years of 1982 through 1986, Mr. Marino was in fact secretly using advanced technology to solve crimes. During these crime-solving sprees, he went by the name Michael Night.

He also employed an artificially intelligent car to assist his efforts to bring these dangerous criminals to justice without any regard to his own life or safety. We further inquired with Kitt, the true brains behind the crime-solving duo as to why Dan Marino ended their secret endeavor to serve humanity in 1986, and Kitt replied “hell if I know”.

This is not the only time Mr. Marino has done undercover work under a different name. Going by the name Mitch Buchannon, it has been revealed that quarterback legend Dan Marino also spent the years between 1999 and 2001 as a buff life guard in California and Hawaii.

Marino/Knight fearlessly saved countless lives, dramatically rescuing potential drowning victims time after time while working side by side among some of the world’s most beautiful life guards. This would certainly explain that great tan he sported through the 90s now wouldn’t it?

Our assumption for why the famous Dan Marino engaged in these activities under a pseudo name is that he was doing top secret undercover work for the CIA or possibly with a black ops sector of the government. Now we are proud to say that most of our investigative work entailed sitting at a table together staring at two pictures.

One photo was of Dan Marino, the other photo was what we believe to be his primary alias, David Hasselhoff. We believe these two photos are actually one in the same man. It was clear from those two pictures (which we have included here), that they are unequivocally and undeniably the same man. Based on that, we didn’t feel any verification or confirmation of our findings was really necessary. It was clear that our assumptions were more than enough evidence to go public with our results. And that’s just what we did. Take a look…… 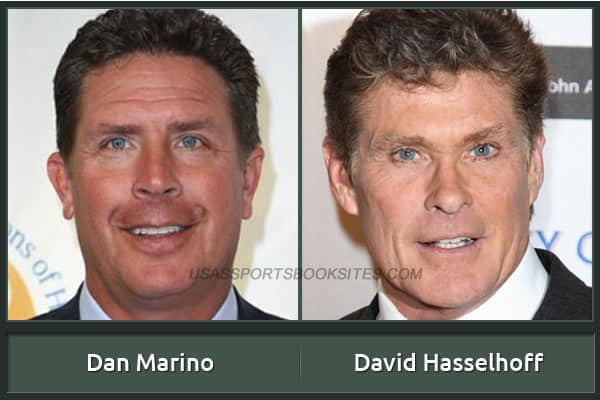 You’ve heard of NBA coaches becoming arrogant amidst their success and power, but you may not have heard the way some coaches take it a bit too far. Carlisle is our most poignant example. Believing that as coach to the Mavericks he is literally God’s gift to this earth, he decided to high jack God’s job and literally play His role.

In what we can only assume was God’s sense of humor; He went along with this charade to see just how well Carlisle could handle the job. Sources report that he didn’t handle it well at all, leaving millions of prayers unanswered and dropping the ball on miracles in the most dire of circumstances. He eventually conceded and admitted to God that His job was harder than he thought, and maybe he wasn’t quite as talented as he believed he was.

This was not Carlisle’s only embarrassing off the court secret exploit. Through several self-administered experiments and using numerous aliases, he tampered with fate by eliminating his own ability to say no, testing the waters as a serial liar, and impersonating a man who claims not to have known his entire life was a reality TV show – come on Rick, nobody is falling for that.

It is also reported that he tried to steal Christmas gifts from an entire community, and spent millions having a green mask custom made to only fit him to effectively hide his identity. His attempts at training penguins and robbing banks with co-conspirator Jane were downright comical, though we’re sure that was not his intention.

While his arrogance at believing the multiple aliases he used throughout these exploits effectively hid his identity is not attractive, at the very least, he has entertained us all quite well. Below is a photo of him beside his most often used alias, Jim Carey. 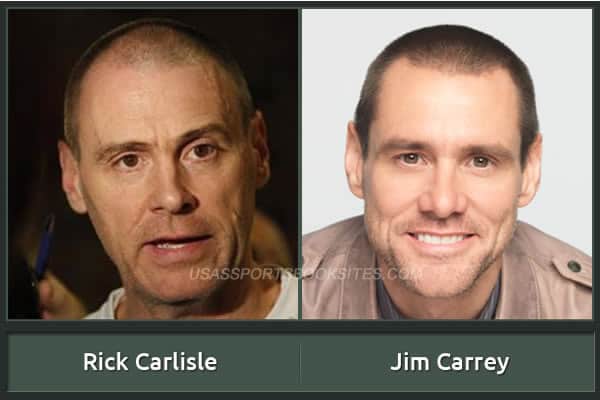 Cris Collinsworth – What Would You Take For That?

Professional football players often develop a love for being in front of the camera. Chris Collinsworth’s career transformed from NFL player to prominent sports commentator, but his TV career isn’t limited to sports. As an educated and successful man, it wasn’t hard for Chris to feed his love for the camera while camouflaging his love for old hillbilly junk through a secret identity that doesn’t even require a disguise.

Using the alias Mike Wolfe, Collinsworth has created a successful reality TV show (American Pickers) that involves him picking through the junk people horde in their barns, sheds, and garages. His alias protects his sophisticated sportscasting persona while giving him free rein to dive head first into the world of strange, old, meaningless trinkets that others no longer want. It’s a riches to rags story……literally 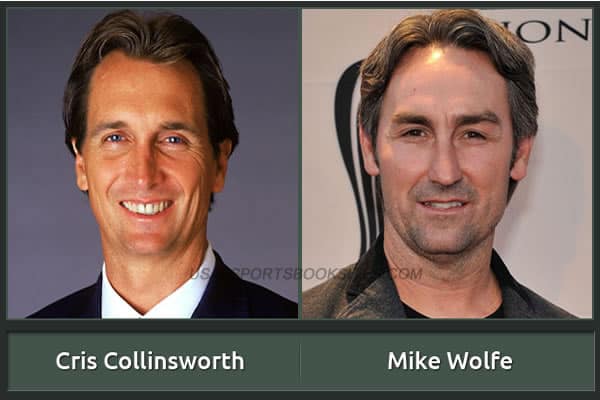 Ed Werder – Put Em Up, Put Em Up – A Look at Ed’s Secret Quest For Courage

Ed Werder is the ESPN sports commentator that has become synonymous with NFL sportscasting excellence. He’s great at his job and respected for his knowledge of the game. However, there’s more to Ed than you may realize. He embarks on a type of cross-dressing that is not necessarily ‘gender’ related.

It has recently been revealed that Ed Werder has been spotted sporting a highly unrealistic lion costume, complete with face makeup, mane, and a tail, which usually ends up between his legs as he runs. The sightings of Ed the Lion have often found him making preposterous demands, such as yelling at others to ‘put em up, put em up, only to apologize and beg for forgiveness a few moments later.

He then follows up this odd attack with sobbing in which he reveals that he lacks courage. It seems that Ed’s secret quest for courage has certainly set him up for some embarrassing moments. I mean nobody wants to see a grown man cry like a little girl, whether or not he’s in a lion costume. Ed, we think that it would show real courage for you to come out in public in that stupid costume and face your fans!! 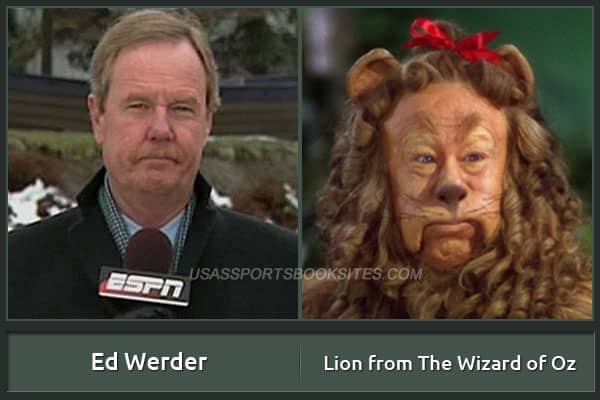 Jacob’s secret identity was hidden in plain sight, right under our noses (or maybe hidden by his nose – it is big enough to do the job). Secretly masquerading as a TV talk show host, this professional cutman has made a name for his alter ego through his hit show, Geraldo at Large, and through his regular appearances fighting with the reporters on Fox News and anyone else with any common sense that he runs into.

Yes, he goes by the pseudo name Geraldo. How this has gone unnoticed for so long is beyond us, but we’re sorry Stitch, the secret’s out. Don’t get too worried though, you can always stay in character and deny the truth vehemently and then scream racist to anyone who disagrees. It’s the Geraldo way. 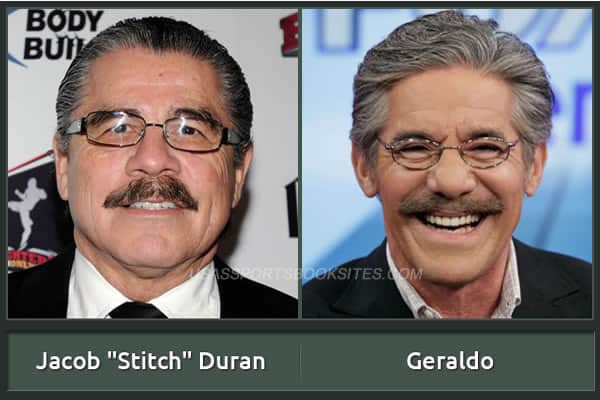 In what we believe to be an effort to hide his unconventional interests in healing and the paranormal from his fans, coach Mike Tomlin has undergone some secretive adventures that allowed him to make a difference in the lives of others without affecting his reputation as an NFL coach.

Using the alias Dr. Eric Foreman, Mr. Tomlin has been observed practicing advanced medical techniques along side world-renowned physician Dr. Gregory House. We are not sure when or where he attended medical school. He spent several years working with Dr. House at a prestigious teaching hospital, bringing miraculous healing and cures to patients who had no other hope but this particular medical staff.

Tomlin earned a reputation for publicly butting heads with Dr. House, something that not many were brave enough to do. In more recent endeavors, Tomlin is secretly involved in working with families and individuals in Missouri who have undergone a paranormal experience known as resurrection. For this line of work, he is using the alias Marty Bellamy.

In this humanitarian role, it is quite possible he is expressing a desire to explore supernatural events, a modern day ghostbuster if you will. Between his interests in healing the sick and working with those who have been revived from the dead, we are wondering if his next secretive escapade will include the zombie genre. The image below depicts him next to his most often used alias, Omar Epps. 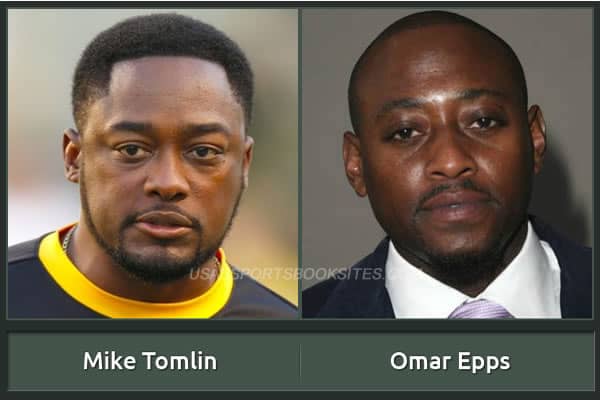