Von Miller was born on March 26, 1989, in Dallas, Texas. His parents, Von and Gloria, were both high school and college athletes and owned a power supply company. Together they pushed their son to pursue athletics. Miller attended DeSoto High School in DeSoto, Texas. He played football and ran track while there. In his junior year, Miller racked up 37 tackles (14 for losses) and 7 sacks. His track and field experience consisted of the 110m hurdle, triple jump and javelin throw.

He was considered a four-star recruit coming out of high school. With offers from Texas A&M, Ole Miss, Florida, Oklahoma and Texas Tech, Miller decided to stay close to him and become an Aggie. Miller played at Texas A&M from 2007 to 2010. He played defensive end and was part of the Freshman All-Big 12 after putting up 22 tackles. Miller also had 2 sacks, 4 tackles for loss and a forced fumble.

Miller dealt with some controversy during the later part of his freshman year, mainly due to his own actions. New coach Mike Sherman reprimanded him for skipping classes and not performing well in practice by suspending him. Miller thought about transferring schools but was convinced to stay by his father. The move proved fortuitous for Miller because he adopted a better work ethic and a better attitude.

His sophomore year saw him shifted to weakside linebacker and he featured in each game of the season. Miller posted 44 tackles (with 25 solo stops) and led the team in sacks. While Miller’s talents lie in the pass rush, he was limited to more of a pass coverage role during this time. It wasn’t until his junior year that his potential started to shine through.

As a junior Miller became what is known as a jack, which is a mix between defensive end and linebacker. This allowed to him to contribute to the pass rush and led to a spike in his numbers. Miller had 17 sacks, the highest of the nation, and 21 tackles for loss. Miller was named first-team All-American, the first Aggie to do since Jason Webster in 1999. Defensive coordinator Joe Kines heralded his performance and compared him to Derrick Thomas, one of the best linebacker/defensive ends in the NFL.

With a new defensive coordinator in Tim DeRuyter, Miller switched over to outside linebacker. Despite dealing with an ankle injury setback, Miller had a strong season that won him the Butkus Award for the best linebacker in the country. Interestingly enough, Miller graduated from Texas A&M with a degree in poultry science and has his own chicken farm which he tends to in his spare time.

Miller considered opting out of his senior year to enter the NFL Draft, but we would’ve been considered a second-round pick at best. By finishing out his college career, his draft stock went up. Miller was drafted #2 overall by the Denver Broncos in the 2011 NFL Draft. This made him the highest selected linebacker since 1992. While some analysts criticized the ambitious pick, especially considering the Broncos’ defensive style, Executive Vice President John Elway stated that Miller was an easy choice due to his athletic caliber. Miller took the #58 jersey in honor of Derrick Thomas, his favorite athlete.

His first season in the league was quite successful. Miller was selected to the 2012 Pro Bowl after posting 11.5 sacks, 19 QB hits and 29 QB hurries. He was named AFC Defensive Player of the Week after his game against the New York Jets. Perhaps his greatest achievement of the year was winning AP Defensive Rookie of the Year. 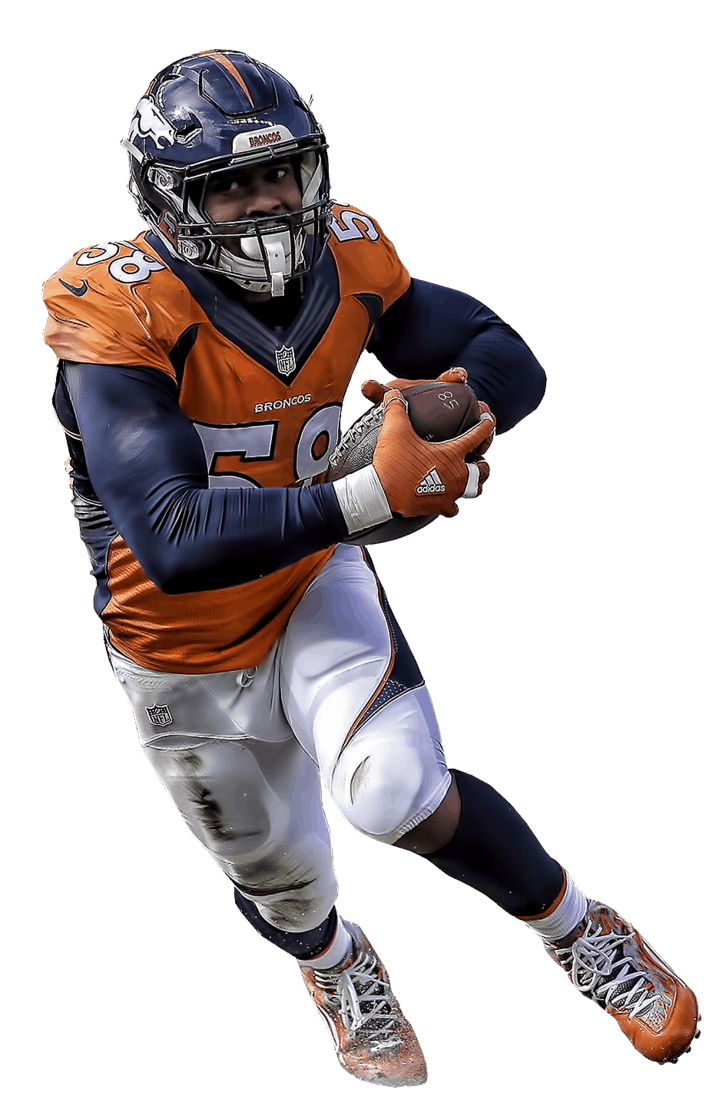 Miller’s third season was marred by controversy. He was suspended for 6 games due to attempting to cheat a drug test. Soon after his return, Miller scored his second career touchdown off a fumble recovery against the New England Patriots. To make matters worse for his third season, Miller tore his ACL in December on the road against the Houston Texans. Denver still made it to the Super Bowl that year but was routed by the Seattle Seahawks.

The 2014 season was a nice return for Miller. He recovered from his injury and posted 14 sacks, 59 tackles, and a forced fumble. The Broncos’ season didn’t amount to much, but it was good to see Miller getting back into the rhythm of things. This season was a nice precursor to their next.

Miller reached 50 career sacks in his next season. He is the third-fastest player to ever do so with only Reggie White and his idol Derrick Thomas ahead of him. The Broncos had a strong season with QB Peyton Manning and Miller’s strong defense. They beat the New England Patriots in the AFC Championship and even managed to sack QB Tom Brady a couple of times. Miller went on to feature in his first ever Super Bowl and had an incredible performance.

They were up against the red-hot Carolina Panthers who had the #1 offense in the league. Miller forced a fumble via sack on QB Cam Newton which was run back for a touchdown. The Panthers fought back into the game and had the potential to win on a late drive, but Miller forced another fumble to give his offense another shot. The Broncos won 24-10 and Miller was named the Super Bowl MVP.

The following year, the Broncos decided to pay back their star defensive player by placing a franchise tag on him. Miller became the highest paid defensive player in NFL history after signing a 6-year deal worth $114.5 million ($70 million guaranteed). He finished the season with 13.5 sacks and 24 QB hits. His colleagues named him #2 in the NFL Top 100 Players of 2017 list.

Betting on football is a common practice in the USA, and Superbowl betting is one of the most wagered on events in the world. Since there is a sports betting ban for most US states with the PASPA Act in place, players often look for online sportsbooks that offer football betting. Prop bets, moneyline, points-spread, over/under, and parlay bets are usually associated with betting on American football.

On top of his incredible stats—he holds 4 franchise records—Miller contributes to his community as well. He started Von’s Vision in 2012, a charity program that provides free eye examinations and eyewear to children from low-income families in the Denver area. He also started another program in 2015 called the Von Miller’s Back To School Vision Day. This program helps 5,000 low-income first-grade students receive free eye exams and eyewear before they go back to school. The program is designed to screen and cut prescription lenses in less than an hour.

The Broncos are going through a bit of an offensive slump at the moment that is bringing the team down, but Miller’s defensive contributions shine through. The franchise is hopeful to draft a star in the 2018 NFL Draft to help them on offense after losing out on QB Kirk Cousins. Miller’s charity efforts will continue as he strives to improve the Denver community. As far as his playing goes, don’t expect Miller to let off the gas anytime soon.