If you’re looking for where to bet on NFL Draft action, you’ve found it. While there are some domestic options for legal draft betting, most US gamblers don’t have a nearby venue – or easy online access to a sportsbook – where they can bet on the biggest event of the NFL offseason. Fortunately, you can sign up with any of the reputable offshore sites listed here and wager on the draft in style.

Betting on NFL Draft results is a time-honored tradition in Las Vegas, and it’s one of the few events you can wager on in Sin City that doesn’t explicitly happen “between the lines” on a field of play. Of course, offshore betting sites don’t have that problem, which is why you’ll always get a much larger number of NFL Draft prop bets and futures at offshore books than you’ll find anywhere in Nevada.

So read on to find out how to join a legitimate USA sportsbook site where you can put a little money on the NFL betting board while teams put a ton of money on the draft board. 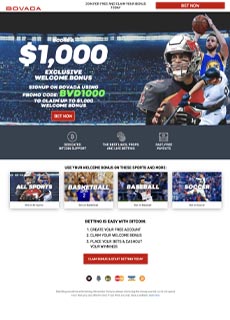 Bovada is America’s favorite sportsbook, and it’s been serving USA players for nearly a decade (with a pedigree that goes back to the mid-1990s). The company is independently operated in a legal jurisdiction in Costa Rica. Bovada is legal to use for 18+ US bettors and takes members from most states (excluding DE, MD, NJ, NY, and NV, which all have local betting options). If you want to legally wager on the 2022 NFL Draft, Bovada has the most lines of any major sportsbook, with over 100 unique odds on their boards.

Bovada isn’t just a sports betting site, either. The operator has a full Vegas-style casino with hundreds of slots and table games, a poker room with cash tables and tournament play, and even an international pari-mutuel racebook. New bettors who join now can get the best deposit promotion in the industry, a 50% Welcome Bonus worth up to $1,000 with a small 5X rollover. You’re on the clock – Will you make Bovada your number-one pick?

Offers wagers on politics and entertainment

Easy to use, perfect for beginners

Is It Legal To Bet On The NFL Draft Online In The USA?

Yes! Most legal domestic US sportsbooks offer NFL Draft odds, and the sites with domestic online betting have odds available there, too. Still, most football bettors in the US don’t have access to these, so offshore betting sites are the way to go.

There are no federal laws that criminalize individuals from betting with these overseas outlets, and only one state – Washington– has laws against online gambling in general. Though we’ve never heard of any Washington residents being fined or arrested for betting on sports online, you are advised to abide by all local laws before signing up and wagering on the 2022 NFL Draft or any other sporting event.

2022 NFL draft props bets and futures are available at a number of offshore sites, and more will appear as the draft approaches in April. Below are the currently available odds for the 2022 NFL Draft. We will add more NFL Draft betting lines as they are made available.

There are sure to be several standout prospects in the 2022 NFL Draft, but the first overall pick is not remotely a foregone conclusion as yet. In fact, the top picks won't make themselves known until the conclusion of the upcoming NCAA college football season, and there are no surefire number-ones that are coming into the NCAAF preseason with a high degree of hype.

We will list the 2022 NFL Draft order once it is revealed following the completion of the upcoming NFL season. Each teams’ total picks for the 2022 draft will be in parentheses once the draft order is settled.

The following odds were posted for the 2021 NFL draft that occurred earlier this year and will remain in guide as an example until odds are produced for the 2022 NFL Draft.

Total Alabama Players Drafted In Round 1

Total Clemson Players Drafted In Round 1

Total Cornerbacks Drafted In Round 1

Total Defensive Backs Drafted In Round 1

Total Defensive Players Drafted In Round 1

Total Offensive Linemen Drafted In Round 1

Total Offensive Players Drafted In Round 1

How Many Times Will The Broadcast Experience Technical Difficulties?

Will Roger Goodell Be Wearing Sweatpants Or Pajama Pants At Any Point Of The NFL Draft?

2020 NFL Draft - Will Roger Goodell Be Wearing A Suit At The Beginning Of The NFL Draft?

Can I bet on the 2022 NFL Draft from a mobile betting app?

Yes, you can!  All of the sportsbooks listed on this page offer a mobile betting app that provides odds and lines for all their wagering categories, including the NFL Draft.  The app is web-based, so your account information is always presented in real-time and up to date, and you can not only place your bets, but also manage your account and access any other platforms offered by the brand, such as casino, poker, and racebooks.

When can I place my bet on the NFL Draft?

Typically you can place bets right up to a few minutes before the draft starts.  Be sure to verify the cutoff at the sportsbook you intend to place your bet at because it can vary from site to site.  You can also place bets on the next NFL draft months ahead of time as a futures bet.  These bets carry a higher risk because there is less information about the potential players, but they also offer a bigger payout.  Futures bets allow you to place a very small wager for a nice big payout.

How do I get paid if my Draft bet wins?

The sportsbooks we recommend offer several payout methods - but your options are determined by the method you use to fund your account. We recommend using Bitcoin or other cryptocurrencies. Not only is it the easiest deposit method, but it is also your only option for instant payouts. Some sportsbooks even support services to provide instant Bitcoin purchases, such as Zelle to Bitcoin that allows you buy BTC instantly with no waiting period. You can find out which brands handle this the best on our page covering the fastest paying sportsbooks.

If you use a credit or debit card to fund your account, then you can usually request a payout through a check by courier, money transfer or wire transfer depending on the banking suite options available. These options take longer to get paid, but they are reliable.

What time does the NFL Draft start?

The 2022 NFL Draft kicks off at 8:00 PM EST on Thursday, April 28, at which time the first team will be on the clock. All pre-draft betting will close at this time, so make sure to get your NFL Draft props and futures in before that.

How long does each team get to make their draft pick?

Each NFL team gets 10 minutes to make each of their draft picks. However, that maximum allotment is typically used up only if there is any ambiguity or uncertainty about the picks they’re choosing from or if there are any trade negotiations with other teams.

If a team knows which player it’s going to pick, that pick typically comes in rapidly. This is one reason why if your USA sportsbook offers live draft odds, you need to get your own picks in ASAP.

How many rounds are in the NFL Draft?

There are seven rounds in the NFL draft, for a total of 255 picks. The last pick is famously dubbed “Mr. Irrelevant.”

The first selection of the 2022 NFL Draft will be awarded to the team that finished worst during the 2021-2022 NFL season and will be determined after the conclusion of Week 17 (or possibly sooner if a team is performing especially terribly).

Which team has the last pick of the 2022 NFL Draft?

The final pick of each draft is usually given to the team that wins the Super Bowl of the previous season, so that is who will select the last draft pick (unless that team trades the rights to Mr. Irrelevant away).

Does each team get the same number of draft picks?

No. Each team, in theory, starts out with the same number of picks (one per round, for a total of seven), but draft picks are used in trades, which means teams can give up picks or accumulate picks each year, often many years in advance.

Which teams have more than one first-round pick in 2022?

Which college usually produces the most NFL Draft picks?

Since 2000, the Ohio State Buckeyes have produced the most draft picks in the NFL. The following eight schools have all sent more than 100 players to the NFL since the turn of the millennium:

Which NCAA conference do most NFL players come from?

What is the NFL Mock Draft?

There is no singular 2022 NFL mock draft, as just about every major sports outlet holds a mock draft in the lead-up to the NFL Draft itself. The most famous of these is ESPN’s, hosted by Mel Kiper and Todd McShay. Kiper is the leading expert on the NFL Draft, and bettors should listen to his analyses to get an extra edge when placing their own wagers.

What is the NFL Supplemental Draft?

The NFL Supplemental Draft takes place after the normal draft, and it is designed to give teams the chance to select players who did not file in time for the regular draft or who were otherwise prevented from doing so for academic or other eligibility issues.

Since the Supplemental Draft was instituted in 1977, only 46 players have been taken through this route. Far more players make teams by being undrafted free agents.